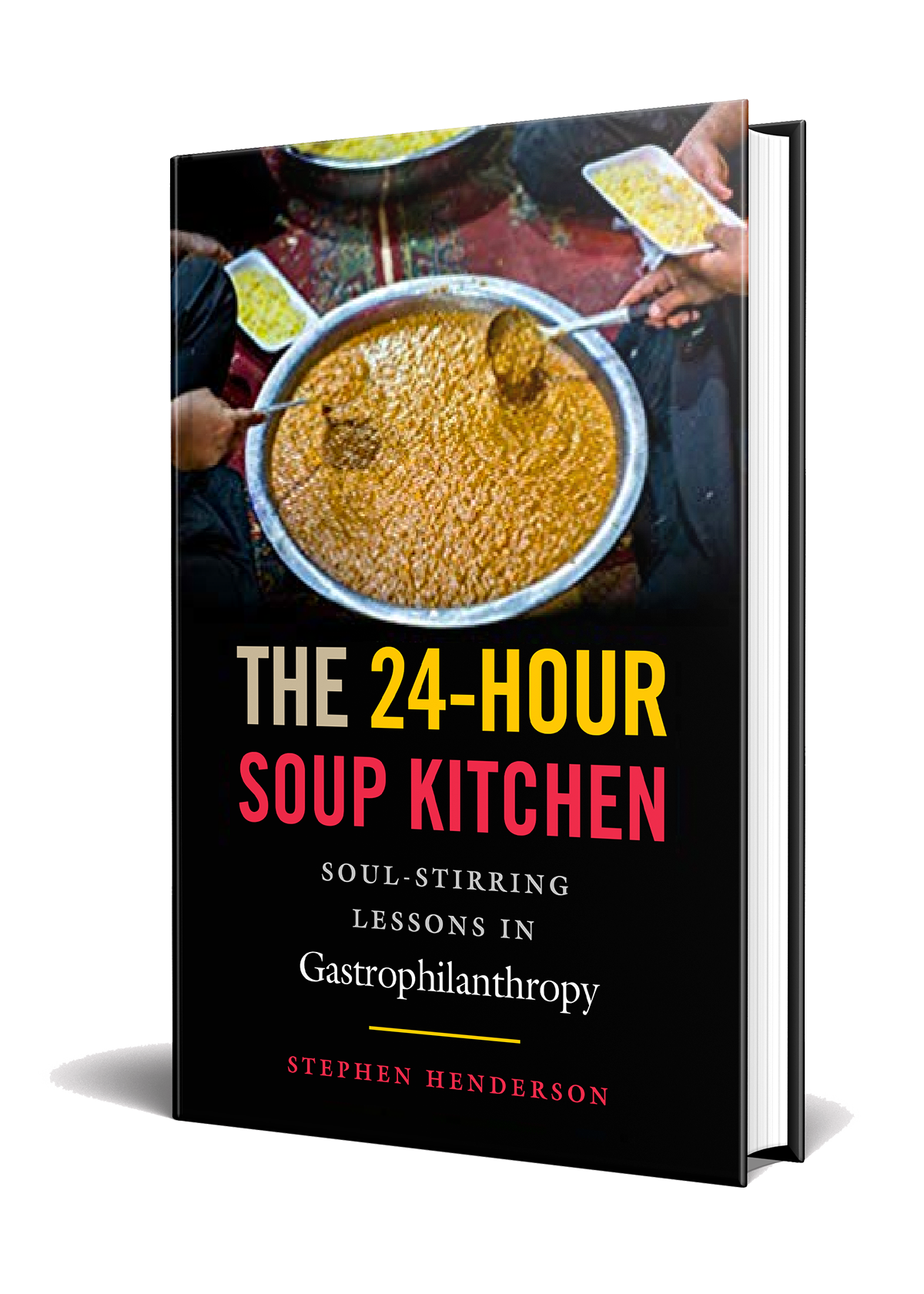 BUY At IndieBoundBUY at AMAZON

After cooking for a week at a soup kitchen in Delhi, India which feeds 20,000 men, women, and children every day, journalist Stephen Henderson became curious about the very different ways in which hungry people are served free meals around the world.  His research into global gastrophilanthropy — or, generosity devoted to nourishing the needy — resulted in The 24-Hour Soup Kitchen.

This intriguing series of field reports brings the reader inside the clamor, chaos, and compassion of kitchens in places such as Iran, Israel, and South Korea, as well as those in Austin, Los Angeles, and Pittsburgh.  Written with a huge heart, and an even bigger appetite, these chapters — sad and funny, sometimes both — may inspire you to embark on your own acts of gastrophilanthropy.

Praise for the book

“Like most of us, Stephen Henderson felt guilty about eating well in a hungry world. Unlike most of us, he did something about it. This fascinating tale is incredibly inspiring. Wondering what you can do? Reading this book would be a good place to start.”

“A graceful, well-balanced, and enlightening work. An inspiring philanthropic account that deftly displays the author’s affability, knowledge, and passion.”

“A captivating and original book. This quest to learn more about gastrophilanthropy is at once a vibrant travelogue and deeply moving search for self. I devoured it and still wanted more!”

On his journeys which became The 24-Hour Soup Kitchen, author Stephen Henderson often imagined himself accompanied by the 19th century chef, Alexis Soyer.  Born in 1810 into humble circumstances in Meaux-en-Brie, France, Soyer rose to become the most famous chef in Victorian England.  A true bon-vivant, Soyer was an excellent singer, mimic, raconteur, and a prolific inventor of labor-saving devices for the kitchen.  He also essentially invented the “soup kitchen,” or a highly-efficient way of feeding masses of poor people, when he went to cook in Ireland in 1847, after the country was devastated by the great potato famine. 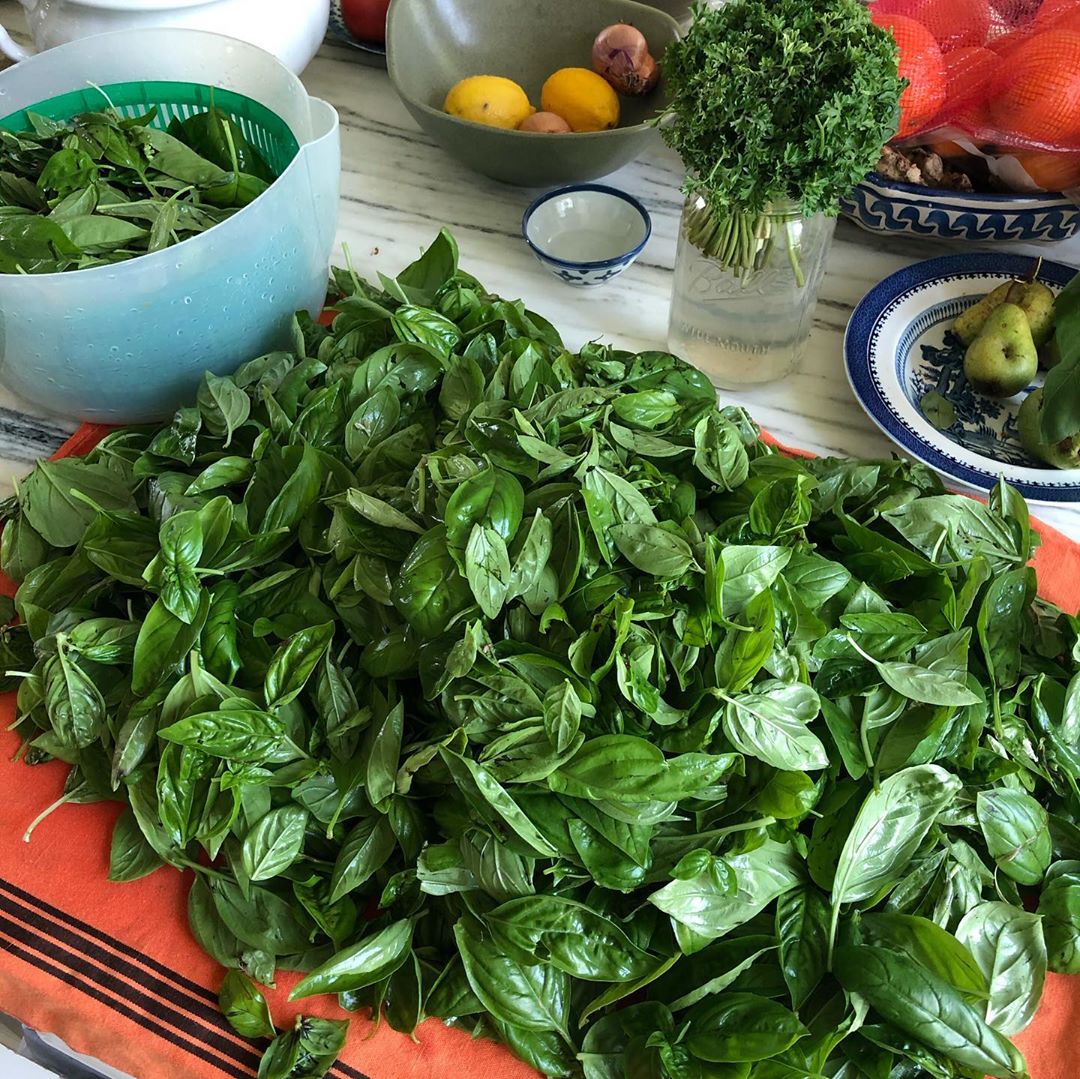 Today’s lunch at the Salvation Army in Hudson was all very Mickey Rooney and Judy Garland saying, “Hey kids, let’s put on a show!” And, Gosh! Did it ever involve a colorful cast of characters! As an overture, James’ and my friend John Tiffany arrived at our house the other day with several enormous bags full of fresh basil, picked from his backyard garden. The three of us set to work making batch after batch of pesto. Quite a lot of this garlicky, nutty, green puree ended up in today’s pasta, along with roasted tomatillo, eggplant, and zucchini — gifts from yet another generous farmer. Then, this morning, it was my honor to have a celebrity guest star in the kitchen along with me. Direct from Broadway, it was the Tony Award-nominated composer Scott Frankel. He graciously agreed to take a short break from writing tunes for the next great American musical (rumor has it, the plot involves a comically imperious opera diva), so he could score a pair of tasty side salads. Scott’s got such a song in his heart, even his way of slicing a plum made me hum. (He also dished some juicy backstage gossip, but not another word about that!) Three hours of fiddling together, and toe-tapping choreography as we served it up, allowed the curtain to rise on enough delicious food to delight nearly 90 guests. That’s entree-tainment! @scottfrankelny@realjohntiffany@jameslaforcenyc 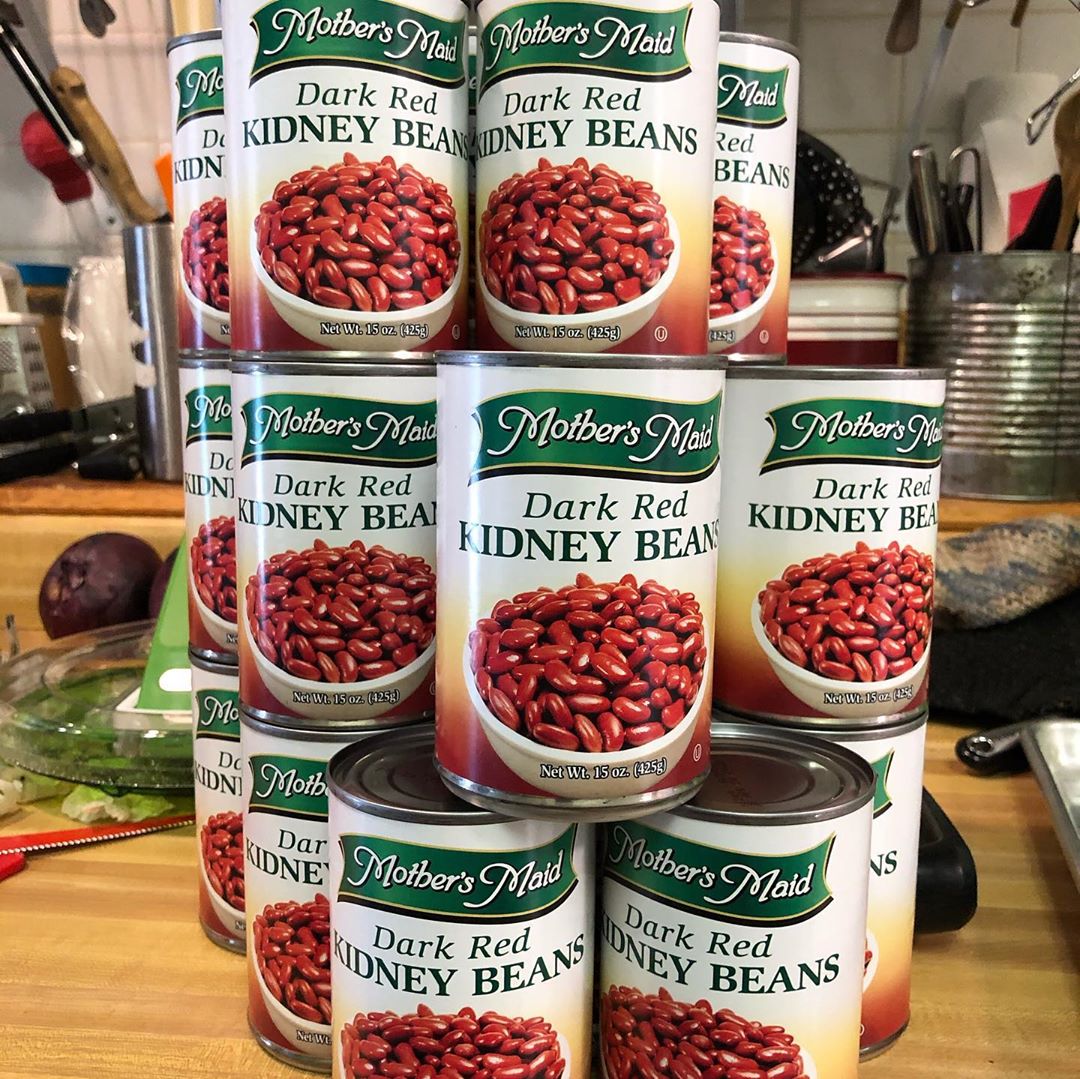 Sometimes you have to adopt (or convincingly fake) a “can do” attitude. Such were my thoughts yesterday, when I made a preparatory visit to the Salvation Army soup kitchen in Hudson, to see what victuals were on hand to cook with at lunch today. Not much, as it turned out, other than many, many tins of red kidney beans, and an even greater quantity of canned beets. Yum! Well, say what you will of Big Tech’s algorithmic assault on our hearts, minds, and souls, it is also a Big Help when needing on-the-fly recipes. Thanks to Tim Cook and Sundar Pichai, I used my cell phone to Google up a kidney bean curry called Lubya, and a salad of beets, spinach, walnuts, and pears (some farmer unexpectedly dropped off a bushel) with a lemon vinaigrette. Cranking away with an opener, I found myself strangely mesmerized by the beauty of all those severed lids. Squinting at them, piled on a kitchen countertop, they began to look like an Art Deco design — maybe a wall paneling detail on the Normandie, that gorgeous ocean liner from the 1930’s. See what a little imagination, and wishful thinking, can do? 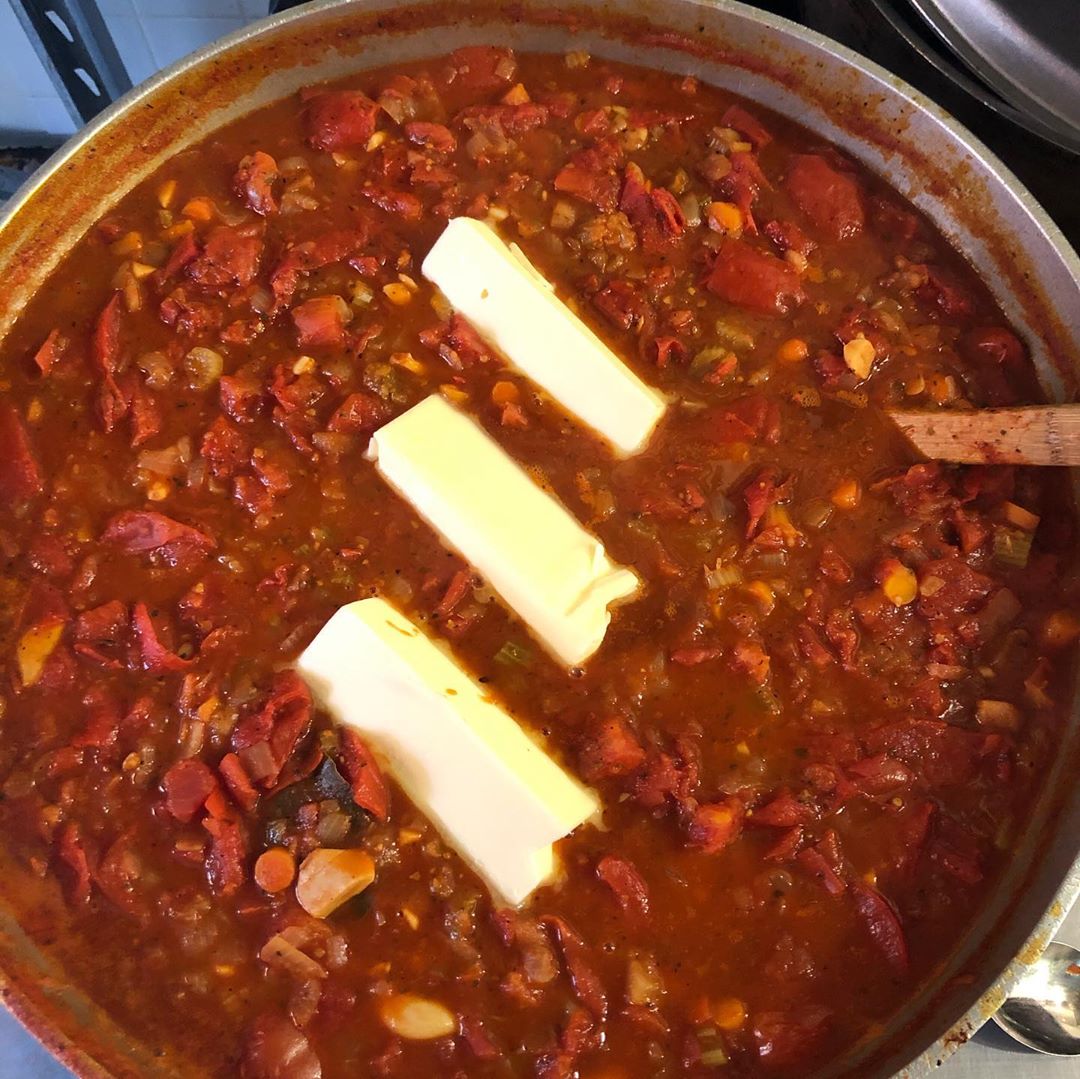 Good Lord! Is that butter melting into the tomato sauce I served today with cheese tortellini at the Salvation Army soup kitchen? Well, yes, it is. Allow me to explain. One of the very first trips James and I took together as a couple, some thirty years ago, occurred when an older gentleman invited us to be his weekend guests at a beach house he had in Rhode Island. While I wasn’t exactly just fallen off the turnip truck back then, I’ll admit I wasn’t yet accustomed to the high-flying style of our host. It was a clear, cool September evening when we drove north out of Manhattan in his Jaguar. This snazzy car felt snazzier still as it was outfitted with what was then state-of-the-art-technology: a CD player in its trunk that was shuffling a mix of discs with the silken-voiced Luther Vandross in heavy rotation. “I just don’t wanna stop / Never too much / Never too much.” That a joint of excellent quality weed was soon being passed between the three of us only made Luther’s crooning all the more seductive. Once at the beach, James and I sat on bar stools, sipping red wine, while we admired the practiced ease with which our host tossed together a green salad, pasta, and a fresh tomato sauce, into which at the last moment, he dropped a stick of butter. I’ve subsequently learned this is a culinary trick championed by the great Italian chef, Marcella Hazan. Three decades ago, however, I thought I was hallucinating. What had I just seen? Well, if we’re lucky enough, we live and learn. Those favorite recipes we cook from memory are exactly that … memories. Of those, there are never too much, never too much. 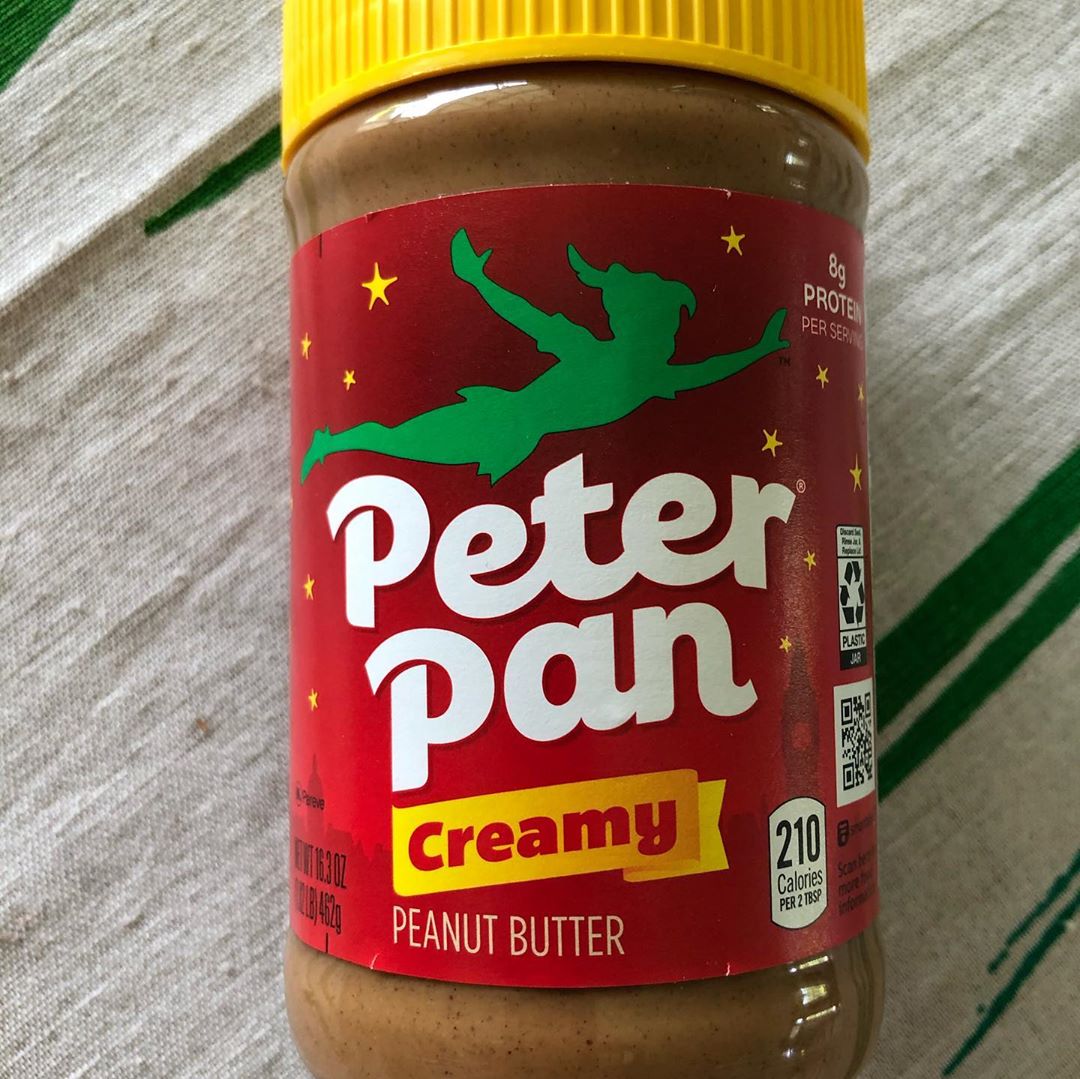 What follows is bittersweet. It’s a story inspired by a cookie. Yes, I made actual food for lunch today at the Salvation Army in Hudson — the entree was a cold pasta salad with tuna and tarragon— but the real prize were peanut butter chocolate chip cookies I baked yesterday. While buying ingredients for this recipe, I was startled to learn one of my old clients was still in business. You see, back when I was a baby publicist, working for Edelman, a firm in Chicago, Peter Pan peanut butter hired us to “generate buzz.” The P.R. business for consumer products was a good deal wackier and scrappier forty years ago, with Edelman being particularly notorious for devising stunts of questionable taste. How else to understand making a bizarre leap of association between the “lost boys” in J.M. Barrie’s famous book, and what was in the early 1980’s a national paranoia over child abduction. (Remember Etan Patz?) I was put in charge of creating the “I Can!” Safety Plan, sponsored by Peter Pan peanut butter, with simple rules to teach children about how to avoid being kidnapped by a stranger. Over the course of many weeks, I wrote a press kit, hired a spokesperson, and arranged a press luncheon at the Park Lane Hotel in New York City, where Peter Pan’s deep research into this crisis would be revealed to the national media. Only problem was, my research was exceedingly shallow. Indeed, it hardly took any study to uncover the simplest of facts; namely, the overwhelming majority of so-called child abductions were actually perpetrated by an estranged parent. Being nabbed by a stranger was very, very rare. Unfortunately, by the time I became aware of this inconvenient truth, it was too late. Invitations were already in the mail to the Park Lane event, not to mention many months of retainer fees collected by Edelman. So, we went ahead, with me in a fearful agony that some journalist would spoil things by pointing out the “I Can!” Safety Plan was completely ridiculous. Incredibly, however, no one called my bluff — it was as if we’d all silently agreed to believe in never never land. 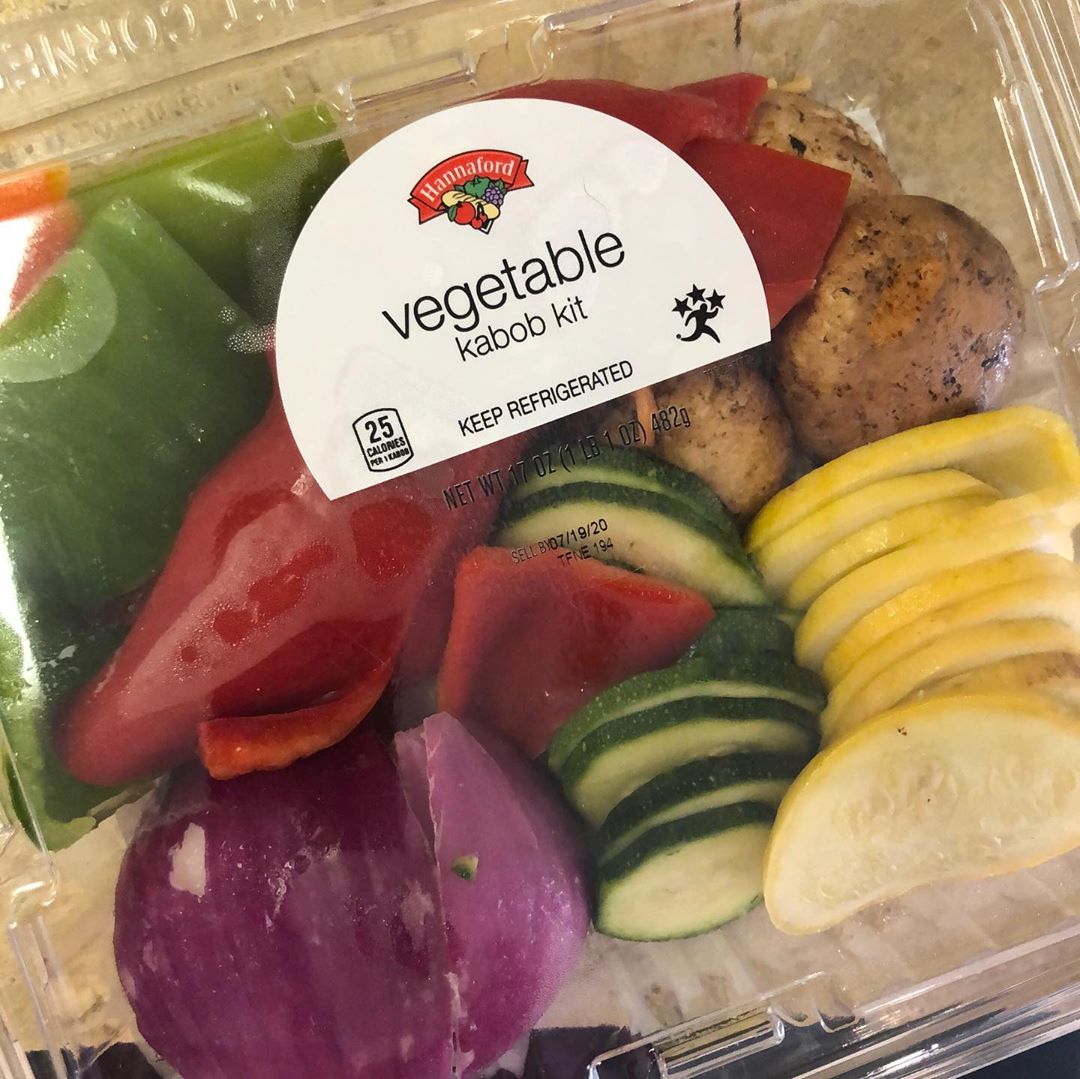 I need to be flexible in my menu planning, as it’s always something of a surprise what donated food is available (or not) to cook with at the Salvation Army soup kitchen in Hudson. Today, there was a quantity of “Vegetable Kabob Kits,” countless bags of desiccated baby carrots, sliced apple and grape “snacking trays” — complete with a vile caramel dip— and many pieces of half-dead pitahaya (dragon fruit), each one still affixed with a $5.99 price tag. Hmmm. What would YOU have made of all this? I ended up preparing a pasta primavera, after I suddenly recalled a tip, cadged from Mario Batali, who taught me that a few lemons (skin, pith, seeds — the whole shebang), pureed in a Cuisinart with a bunch of garlic and olive oil, is an excellent way to begin a zesty sauce. Fruit salad and a bagel with a schmear (!) completed the meal. 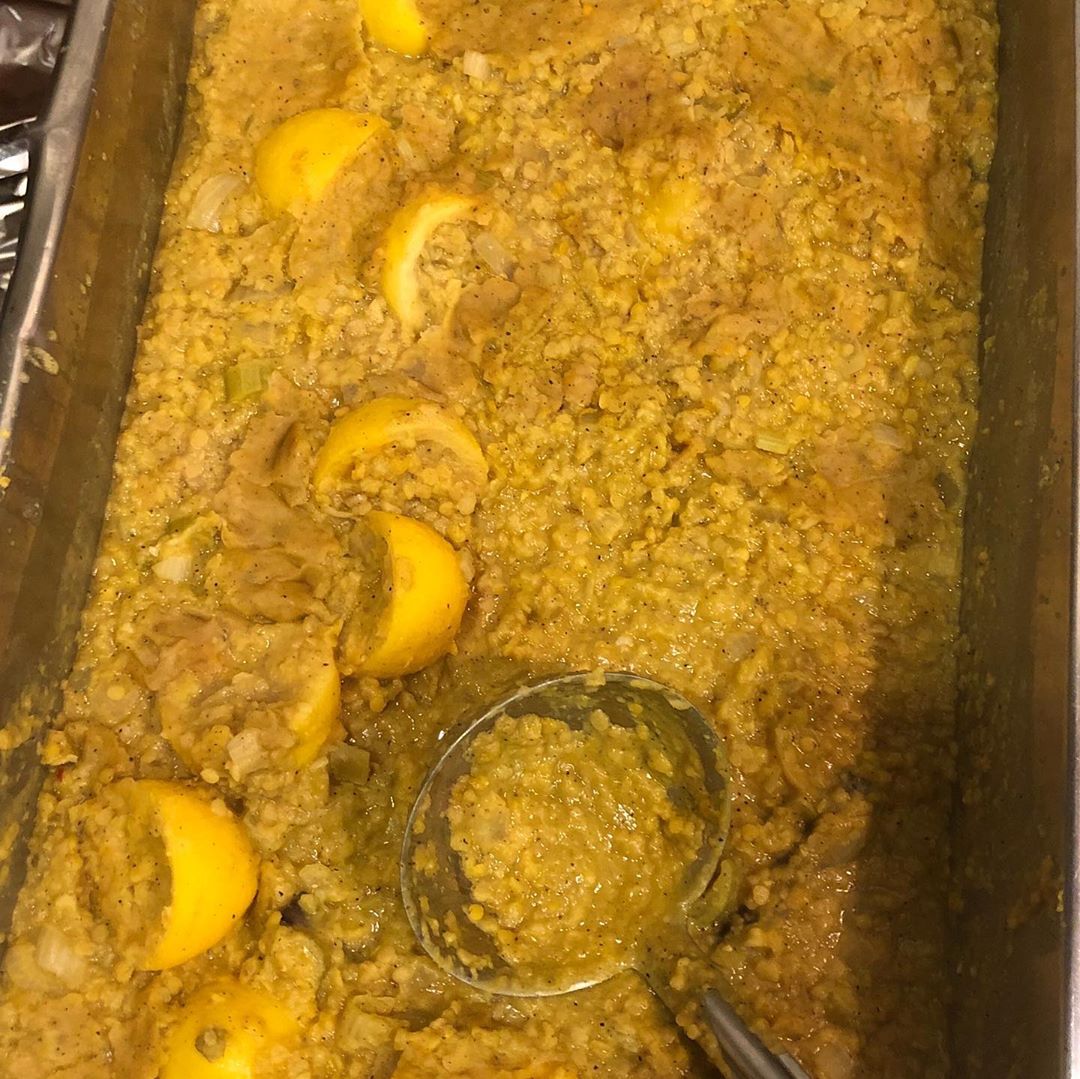 Call them Ismail’s. I’m referring to the red lentils, or dal, I made for lunch today at the Salvation Army soup kitchen in Hudson. The recipe I used is from Ismail Merchant’s cookbook entitled, Passionate Meals: The New Indian Cuisine for Fearless Cooks and Adventurous Eaters. I’ve cooked it so often, and it’s simple enough — red lentils, onion, garlic, halved lemons, and cinnamon sticks — that I’ve set it to memory. Merchant, a producer who collaborated with his life and business partner, director James Ivory, to make 44 films (among them such classics as “Howard’s End,” “Maurice,” and “A Room with a View”), was known to cook enormous quantities of Indian food for the delighted cast and crew on their movies. Merchant died in 2005, but I like to think he’d be pleased to know some of his “passionate meals” are still finding their way into hungry stomachs.